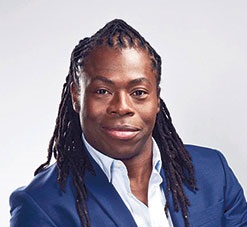 Retired Paralympian Ade Adepitan MBE has become the first Ambassador for Every Parent and Child (EPC).

On joining in this exciting role, Ade says, “At the age of 12, I was introduced to wheelchair basketball and independent living by an east London based charity that worked with disabled children and young people.  Based on their support, I was able to achieve many of my dreams later in life.  I recognise that same philosophy at Every Parent and Child – to support children and young people to develop and thrive in life. I am delighted to be part of the charity and look forward to helping them grow and support more people.”

Ade has become a familiar face on TV as a presenter on the Travel Show, Unreported World, One Show, Channel 4 coverage of the Beijing, London and Rio Paralympics and, recently, he led the Channel 4’s coverage of the World Para Athletics Championships.

A retired Paralympian, Ade discovered wheelchair basketball when he was twelve. During his early career Ade had one burning ambition, to win a medal in the Paralympics for Great Britain. This dream came true when he was as selected to compete in the 2004 Athens Paralympic Games.

In 2005 Paralympic World Cup held in Manchester, UK, Ade assisted GB to win Gold by scoring a free-throw in overtime. He also captained his country to a Silver medal, at the 2002 World Championships in Kitakyushu, Japan.

Adding to his 2005 wins, Ade was a member of the GB bid team that secured travelled to Singapore and helped the UK win the London 2012 Paralympic, and Olympic games. In the same year Ade was also awarded the MBE for his contribution to disability sport.

It is vital to know the views of our staff, volunteers and service users on ideas on how to update our brand.

Please complete our survey and you could win a £35 Cineworld voucher !!

To start, please click www.surveylegend.com or copy and paste to your web browser.   The survey will take 10-15 minutes.